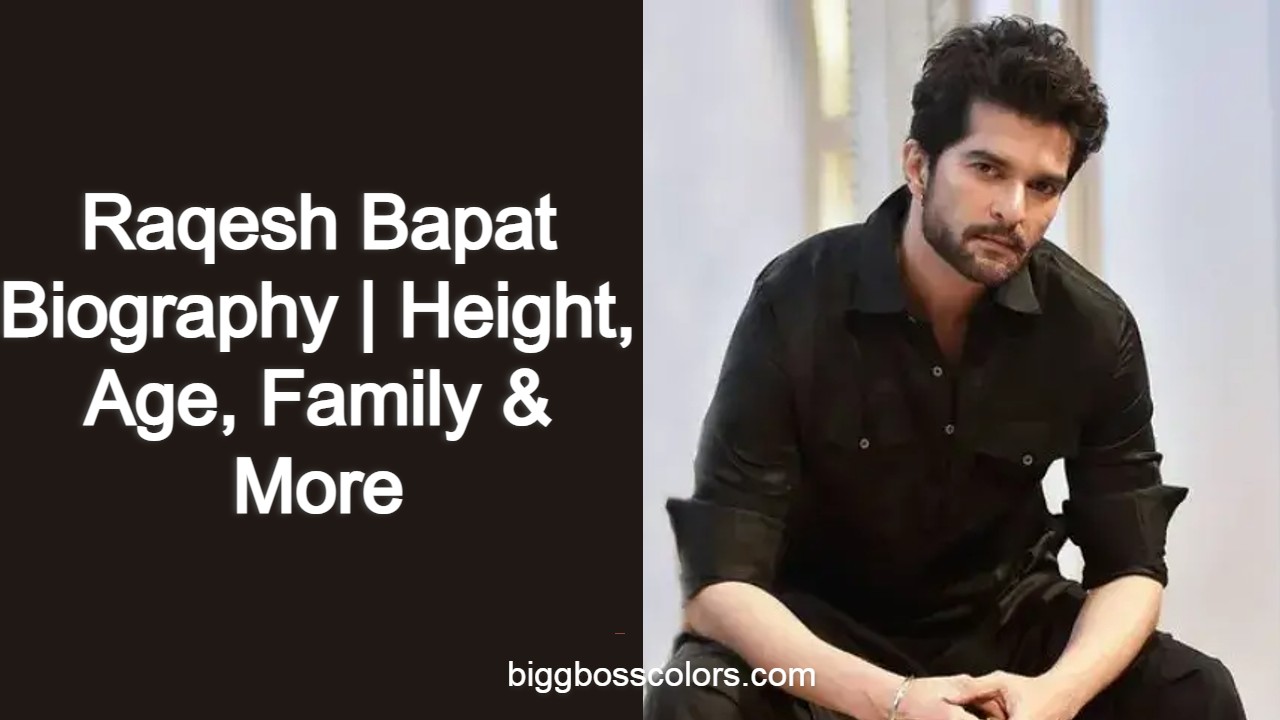 Raqesh Bapat Biography: Raqesh Bapat was born on 1st September 1978 in Mumbai, Maharashtra. His father is an army officer and his mother is a school teacher. Raqesh Bapat completed his primary education in Amravati and later did his MBA post-graduation from Mumbai University.

He has also been seen in many Hindi television shows like Honge Ju, Ek Packet Umeed, etc. He also won the Indian Telly Award for Best Actor in a Negative Role in 2007 for the serial Saat Phere: Saloni Ka Safar.

Raqesh Bapat is an Indian film actor, painter, and model best known for his performance in the Bollywood film ‘Tum Bin’. He is an actor who has spread his acting skills in the TV world apart from acting in the film world. He is currently more active in the Marathi industry. He has worked in famous Marathi films like Vrindavan.

Raqesh Bapat was born on 1 September 1978 in Amravati, Maharashtra. He completed his early schooling in Amravati. After this, he continued his studies and completed his graduation from a college in Mumbai. Raqesh Bapat continued his studies and did his post-graduation in Master of Business Administration (MBA) from the University of Mumbai. He was attracted to modeling since his college days. He also won the title of Mr. Pune while doing modeling. He then participated in the 1999 Grasim Mr. India with a focus on modeling, where he was the runner-up of the competition, after which he participated in Mr. International where he was once again the runner-up of the competition.

He gained recognition in the entertainment industry after participating in the shows Grasim Mr. India and Mr. International. Due to which he got an opportunity to participate in commercials for some brands like Colgate and Wrigley’s Gum. Seeing this opportunity, he worked in some television commercials. Based on his achievements and his outstanding performance in advertising, he got the opportunity to play the lead role of Amar Shah in the Bollywood film Tum Bin in the year 2001. He made his debut in the Bollywood film industry with this film.

He made a mark in the hearts of people by performing brilliantly in the film. The following year in 2002, he played the character of Gaurav in Dil Vil Pyaar Vyar and also played an important role in another film Kuch Dil Ne Kaha. In the year 2003, he played the role of Raj in the film Tumse Mile Wrong Number.

After this, continuously worked in Marathi films since 2015. During this time Raqesh Bapat worked in Marathi films like Citizen, Vrindavan, Sarv Mangal Savdhan, Savita Damodar Paranjpe, WhatsApp Love, Mumbai Aapli Ahe, and Forever. Apart from acting, Bapat is also very fond of painting. He has a strange art of painting which makes very beautiful paintings. His love for painting dates back to his childhood when he was in 9th standard when he won the National Award for his painting talent.

From 2005 to 2008, Raqesh did Ek Packet Umeed, Seven, Maryada: Lekin Kab Tak, Simply Sapne, Honge Juda Na Hum, Nach Baliye 6, Qubool Hai, Simply Baatein with Raveena, Yeh Hai Aashiqui, Bahu Hamari Rajinikanth, Tu Aashiqui he has also worked in serials like Ishq Mein Marjawan. In the year 2021, he is once again seen in TV’s most popular show Bigg Boss OTT. He is doing very well in this show and is giving tough competition to other contestants. His chemistry is going on with actress Shamita Shetty in the show.

Bapat was born in an affluent Hindu family. His entire family follows Hinduism and worships Hindu gods and goddesses. Bapat himself is a devotee of Lord Ganesha and being a sculptor, he himself prepares the idol of Ganapati. Raqesh Bapat father name is Late Padmakar Bapat who was a Major in the Indian Army and his mother’s name is not known but he is a school teacher at Dr. Kalmadi Shamrao High School, Pune. Apart from Bapat’s mother, he also has an elder sister named Sheetal Bapat.

Talking about the marital status of Bapat, he is married and his wife’s name is Riddhi Dogra. Riddhi is also such an actress in the TV industry who does not need any recognition. The two met for the first time on the sets of the TV serial Maryada: But Kab Tak, due to frequent meetings on the TV set, both became good friends and started dating each other.

After dating each other for almost 1 year, they got married on 29 May 2011. Raqesh Bapat and Riddhi also participated in the Star Plus dance reality show Nach Baliye Season 6 together. Later, due to some misunderstanding, both of them decided to separate. Eventually, Raqesh Bapat and Riddhi got divorced in February 2019 and they parted ways. Raqesh Bapat does not have any son or daughter yet. Currently, he lives with his family and is looking very happy in his life.

Talking about the net worth of Raqesh Bapat, his total assets are around 13 crores. He is one of the best actors in the Bollywood and Marathi film industry who has played the lead role in many movies till now. His main source of earning is acting in TV and movies. Apart from this, he works in television commercials of different brands, from which he earns a good amount. He also posts some sponsors on his Instagram for which he charges a handsome amount. He also has a Ford car.

Raqesh Bapat’s age is 43 years in the year 2021. He looks quite fit even at this stage of age. his look is quite total and dashing, which inspires the youth towards fitness. In an interview with The Health Site, he told that given the busy life of Mumbai, he focuses more on working out at home than going to the gym. He has all the gym equipment in his house and gym trainers also come home to train him. Apart from sweating for hours in the gym, he also enhances his stamina by doing other activities like horse riding, kickboxing, jogging, and cycling.

Raqesh Bapat is of the opinion that nowadays people focus more on bodybuilding and many people neglect to strengthen the core muscles but he lays more emphasis on functional training to develop them. In which there is more emphasis on strengthening the abdominal core in cardio, plank, ground workout, etc. He is crazy about cycling, he has once cycled from Mumbai to Pune. He believes that along with exercise, adequate sleep is also essential. Therefore, they also take adequate sleep of 7 to 8 hours, only then the body is ready to give the best results of the exercise done.

Their day starts by eating eggs, milk, brown bread and fruits, later they mainly like to have greens and fruits in their food. Apart from this, he completely abstains from junk food and overcooked food. He likes to eat sweets. He does not believe in bodybuilding by drinking protein shakes or taking steroids, instead, he concentrates on body development by spending a lot of time. Apart from this, Raqesh Bapat is a National Award winning journalist.

That’s why they believe that sculpture and painting without physical activities help them to get rid of stress. This hobby of his acts like a stress buster and therapy for him. Apart from this, he is also fond of horse riding, so when he is free, he enjoys horse riding, which gives him a feeling of freedom. The height of Raqesh Bapat is 5 feet 10 inches, which is equal to 178 centimeters. His bodyweight is around 82 kg, he takes a proper diet to keep his body fit so that his body measurement is 40-32-12. His eye color is black and his hair color is also black.

In this part, we are going to share with you all the favorite things of Raqesh Bapat within a single table as you can get hold of every little detail about him at a glance. If you are curious to know what Raqesh Vashisht likes or does not like, please take a look at the table below.

Since 2021, Raqesh Bapat has appeared in several films, TVCs, television dramas, serials, series, and reality shows such as Nach Baliye, Bigg Boss OTT, and Bigg Boss Season 15. Most of them were loved by thousands of people around the world. In this section, we have tried to collect all the lists of what we have done in our careers so far. Here are the Raqesh Bapat movie lists so that you can easily find them.